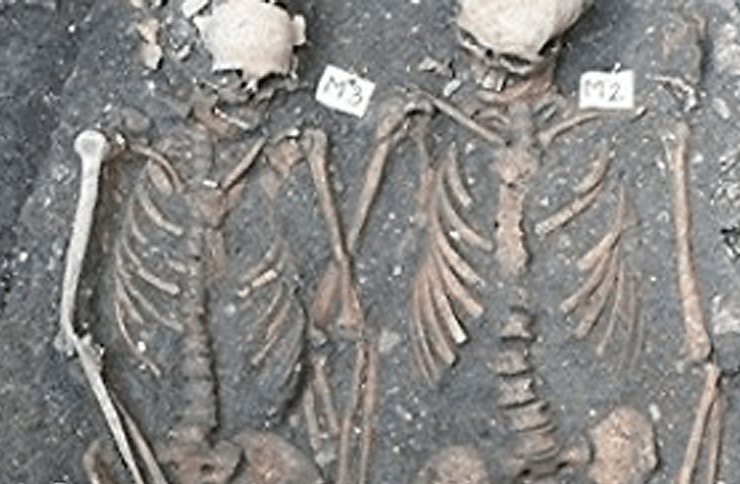 SKELETONS BENEATH THE FLOOR

Stories in which the ghost is linked with the presence of human remains have been told around the world over for centuries. It is a tradition that can be traced back to classical times, and may be considered the archetypal ghost story. A number houses in the UK still harbour what are earnestly termed “screaming skulls” – skulls of ancient individuals which are deemed to be haunted, though reliable reports of manifestations linked with them are hard to come by.

The basic plot of how a hidden skeleton provokes a haunting is provided in the classical story of the haunted house in ancient Athens in which no-one would live in, on account of the sounds of clanking chains and the troublesome ghost of an old man with irons on his wrists and ankles. According to Pliny the Younger, the Stoic philosopher Athenodorus ( c.74 BC – 7 A.D.), came to Athens, rented the house very cheaply, because of its sinister reputation, and sat up late at night, working by the light of his lamp. The noises occurred, and ghost appeared. Athenodorus followed the phantom down the passage into the courtyard, where it vanished. Like a good ghost investigator, Athenodorus duly marked the spot and had it dug up the next day. A man’s skeleton in irons was found buried there. Innumerable variants of this story have been recorded around the world, reported as both fact and appearing in fiction (“…it is arguable that made up ghost stories are just as revealing of social assumptions as so-called authentic accounts” to quote  R.C. Finucane in Appearances of the Dead (1982)). Perhaps in recognition in establishing this classic ghost story Athenodorus was even claimed as a spirit guide to the 19th century  medium the Revd. Stainton Moses (See The Controls of Stainton Moses (1923) by A. W. Trethewy.)

Belief that there is a link between bones and being haunted persists into modern times and can be an excuse for much silliness. Andrew Green wrote in his book, Ghost Hunting: A Practical Guide (1973,2016):

“ I am not suggesting that burial grounds are haunted, but many people seen to associate them with ghosts, ignoring the fact that very few people have been known to die in graveyards or to have been closely linked with graves (apart from grave-diggers). But because the association does exist in people’s minds, quite normal occurrences on the site, or in the new buildings constructed on it, are often assumed to be paranormal phenomena.

“So strong is the feeling that ghosts are associated with the dead that in Hampshire a builder was convinced he had seen a phantom, because he had disturbed an old grave-stone which was being used in the path of a public-house undergoing modernization. The fact that the grave-stone had been brought from the churchyard half a mile away about fifty years earlier seemed to have no effect on this conviction….. I was rather amused by the story in this connection concerning a family in Guildford. A man had cleared a churchyard in Abinger in 1968, and removed two lorry-loads of broken tomb-stones to construct a path in his own garden near Guildford some miles away. This was done quite effectively, but in 1970 the owners of the property, although delighted with the general appearance of the path, were worried by the fact that the previous owner had laid the stone face uppermost so that the fragments could be read.

“So disturbed were they that they took them all up, reversed them and laid the stones face down. At the same time one stone, which was complete, was deliberately broken into fragments because “no one would walk on it” and the younger member of the household “had felt a presence whenever she was near the stone”. It would have been interesting to blindfold her and guide her down the path to see if she could locate it “blind”.

“The general attitude seemed incredible to me, for the stone in question had never been used: it was merely a spare waiting for a “customer”. This provides a good illustration of the power that imagination can sometimes have. Future archaeologists may well be puzzled by finding what appears to be a 19th century graveyard in an area marked on the map as “flood fields”, and which has been the back gardens of property since 1961. Bones will never be found, for the soil is far to acid.”

Certainly, manifestations linked with the restless dead buried under houses are not always as dramatic as ghosts with clanking chains; sometimes it is just a feeling or sensation of unease or bad dreams. In 1883 a Mrs Montague wrote to the Society for Psychical Research about an unnerving  visit to the rectory   occupied by her father  who was rector at Passenham, Northamptonshire, England in June 1872.  Mrs Montague went to visit her parents for the weekend, along with her two children and a nurse maid. Mrs Montague was given a room over the dining room, “, the rest of the inmates of the house being quite at the other end of a rather long passage. I hardly slept at all the first (Saturday) night, being possessed with the belief that someone was in my room whom I should shortly see. I heard nothing, and I saw nothing.“ But more was to follow.

Mrs Montague recalled that on the next morning, Sunday, she did not go to church but went into the dining-room with a book to relax. “It was, I remember, a perfectly lovely June morning. Before I had been a quarter of an hour in the room, and whilst wholly interested in the book, I was seized with a dread, of what I did not know; but in spite of the sunshine and the servants moving about the house, I found it more intolerable to sit there than it had been to remain in the room above the night before, and so, after a struggle, and feeling not a little ashamed, I left the room and went to the garden.”

Sunday night proved a repetition of Saturday, with Mrs Montague suffering a sleepless night, lying “in what I can only describe as a state of expectation till dawn”. She returned to London the next day saying nothing about her two bad nights to her parents or anyone else, whilst the nurse and the children remained behind for another week. When she left on the Monday, Mrs Montague noticed the nurse looked rather gloomy.

When the nurse returned the following week she told Mrs Montague that she hoped never to stay at the Rectory ever again, for she had not been able to sleep there during the fortnight. Each night she had suffered fears which she could not account for in any way. Mrs Montague’s father left in the summer and afterwards confessed that his predecessor had ” thought it right to let him know that that end of the house in which I and my children were put up was said to be haunted, my room especially, and that several of his visitors—his sister in particular—had been much troubled by this room being apparently entered, and steps and movements heard in the dead of night.”

Readers will by now guess the sequel that Mrs Montague then revealed. “Within, I think, a year or 18 months at most of my father’s leaving, the house had to undergo considerable repair, and amongst others, a new floor had to be laid in the dining-room. On taking up the old boards four or five (I forget which) skeletons were found close under the boarding in a row, and also close to the hearthstone. Some of the skulls of these skeletons were very peculiar in form. They were sent up to London for examination. I am ashamed to say, at this moment, I forget what was the exact verdict pronounced on them by the experts. “

To try and corroborate Mrs Montague’s story the Society for Psychical Research made inquiries with the Rector of Passenham Rev. G. M. Capell.  writing from Passenham Rectory, October, 1889.

He wrote back simply stating, ” I found seven skeletons in my dining-room in 1874.”

Such cases with a physical explanation arise in only to a small proportion of the narratives recorded from witnesses as indicating the continued operation of deceased persons; however before assuming that discarnate entities at work, the possibility of subliminal clues or psi abilities akin to dowsing might be at work.