The film promotion says it’s true – but whose truth?

The Conjuring 2: The Enfield Poltergeist – A Look at the Truth About the  story from the Warrens….

What Guy Playfair has to say…..

Many attending screenings of the Conjuring 2: Enfield may well be asking the same question.

Pilate did not stay for answer and whatever the cinema-goer gets from the film (which opened in the United States on 10 June and has UK release on 17 June) it will certainly not be the truth about the Enfield Poltergeist which commenced in a council house in North London in August 1977.

The film poster states – in small lettering – that it is ‘based on the true case files of the Warrens’, Ed and Lorraine Warren, an American couple who made a career of being psychic investigators and demonologists. The phrase ‘based upon’ certainly leaves matters rather open and unfortunately the claims on movie review sites that the film  explores one of the best-known cases that the real-life Warrens ever got involved with, namely London’s Enfield Poltergeist,” a.k.a. “England’s Amityville”  (1) are spurious.  It seems more likely the Warren’s file is based largely upon the book of the case by Guy Lyon Playfair and the findings of other researchers.

So people who find the film “really scary” can relax. It didn’t happen the way The Conjuring 2 pretends.

Undoubtedly the Enfield poltergeist is the best evidenced British poltergeist case of the 20th century. The leading investigators at Enfield were Maurice Grosse (1918-2006) and Guy Lyon Playfair who with colleagues spent many months observing events at the house, following coverage in the Daily Mirror newspaper. With the Enfield case there is abundant evidence that paranormal events did actually take place between 1977-1978.

Maurice Grosse and Guy Playfair undertook over 1000 hours of observations, arising from approximately 180 visits between September 5th 1977 and June 1978, including 25 all-night vigils. Over 140 hours of tape recordings were made, with transcripts of many of these running to over 500 pages (a number of recordings have not been transcribed). There were some 30 other witnesses to strange incidents. The tapes have survived, so we know what happened and who was there at the time. The case was the subject of Guy Playfair’s best-selling book This House is Haunted which was previously subject to another fictional screen treatment The Enfield Haunting which aired on British Sky Television in May 2015. 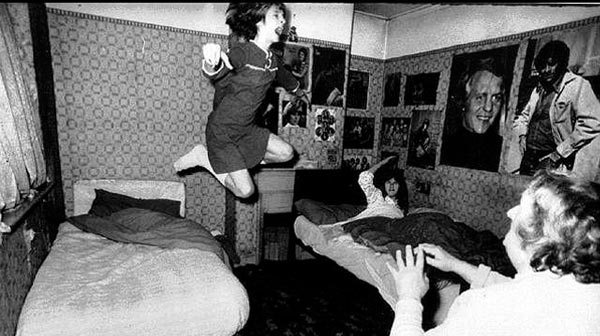 Image from the original Enfield case

Importantly, other British researchers, spiritualists, mediums and journalists also attended at various stages. In many respects it appeared to the investigators that this was very much a classic poltergeist case in centring on adolescent girls, principally 11 year- old Janet and to some extent her older sister Margaret, aged 13, not an infestation of demons. But notably a very wide variety of effects were reported, including fires, objects movements, breakdowns in equipment, noises, levitations and strange trance-like states in the girls, resembling accounts of possession, lasting some 14 months. Although there were criticisms from certain members of the Society for Psychical Research, these largely evaporated after the Society conducted a follow-up investigation over 1980-82 which re-interviewed original witnesses. It concluded that genuinely paranormal incidents occurred. This report ran to 192 pages but it makes no mention of the Warrens or the hokum which makes up the current film

However, two who were not there – other than two token visits – or involved in any of this research effort were Ed and Lorraine Warren, contrary to the suggestions in the film.  The Warrens were never ‘called in by experts’ as claimed in a Reuters Press release. See:

Indeed, they only expressed an interest in Enfield, by letter, as late as May 1978, by which time the case had been active for some nine months. For a full examination of their (non) involvement see the examination by Tom Ruffles:

The Enfield Poltergeist was remarkable for a strange voice, resembling that of an old man, which emerged from 11 year-old  Janet Hodgson and on occasions her sister Margaret, and which has never been satisfactorily accounted for. Analysis suggested it was produced by the false vocal chords but its sustained nature and the content of certain aspects of what it declared have not been explained. Like many alleged poltergeist voices and séance communications many of its utterances were banal nonsense, but on occasions it seemed to generate startlingly accurate information not known consciously to anyone present. Much else happened in the Enfield case – an estimated 1500 incidents – including a number of which were very disturbing, but of a variety that no film-maker or broadcaster interested in a horror thriller would rush to portray. However, the latest film has spun events to suggest that there was a major Catholic influence and battle with the demonic. This is false.

For instance, as depicted in the film, Janet is pictured surrounded by crucifixes that turn upside down and fly off the wall. In fact, Janet stayed with Roman Catholic nuns for six weeks to provide a respite from the difficult domestic and family situation in the house without any incident whatsoever. Similarly, a stint of observation at the Maudsley hospital found her to be physically and psychologically normal.

Going by the rules of evidence which are applied through courts and tribunals in the UK, North America and Commonwealth nations, genuine paranormal events nonetheless occurred around Janet. Ultimately, the totality of evidence for strange events at Enfield is overwhelming, an indeed better than that available for many cases of homicide and sexual offences which result in convictions in the courts.

However, with the current film, the only reason it has avoided ended up in the civil courts is that Maurice Grosse and others depicted in the film are dead, so it is secure from defamation claims. Were he still alive, Maurice Grosse would be suing by now for libel (for instance a television scene involving himself and Dr Anita Gregory is one of the many fictions). In life, Maurice successfully defended his position at law on a number of occasions.

Fortunately, one person is still very much alive and able to offer a refutation to what is shown is Guy Playfair, author of This House is Haunted (1980, 2013). Guy Playfair states the Warrens involvement with the investigation was limited to a couple of visits to the house, at one of which Ed Warren declared  he considered it would be possible “to make a lot of money out of this” (personal communication 7 June 2016). Thereafter both Playfair and Maurice Grosse had little to do with them. Guy Playfair adds, “They must have been twice, as they apparently came back after I’d met them. I don’t remember anyone commenting about them at all. They were just 2 more uninvited visitors who came and went.” (Guy Playfair, 9 June 2016 to Alan Murdie).

Guy Playfair has had no involvement whatsoever with the current film. Still, Ed Warren would appear to have been personally vindicated over the money angle, save that he actually died in 2006.

For an accurate presentation of what happened at Enfield, the viewer and reader is accordingly referred to Guy Playfair’s book This House Is Haunted (1980,2009, 2013 editions) and the original archives and the account referred to by Tom Ruffles, linked above.

As for the real-life Janet Hodgson, the director James Wan has been said he heard that she “really loves” the film. Reuters again claimed:

“She felt that we were very respectful of what they went through and that we tried to capture the spirit – no pun intended – of what happened to them in the late seventies.”

Who James Wan heard this from is not stated. See http://mobile.reuters.com/article/idUSKCN0YU2H6. Janet has kept silent over the whole story as she has done since 1982 with only three interviews since that date. 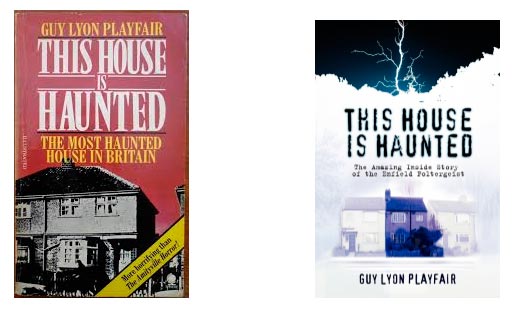 LACK OF A SCEPTICAL EXPLANATION

However, in a strange way the fact that such a fictional rendering has been released shows how strong the Enfield actually case is, and that sceptics have failed consistently to explain what took place in nearly 40 years.

The Enfield case has been subjected to various sceptical (or ‘skeptical’) attacks since the 1970s but these have not advanced since the original outbreak, because of the failure to examine any of this primary data or interview either investigators or primary witnesses. As at 2016, only one critic on Enfield, Dr Melvyn Willin, archivist for the Society for Psychical Research has examined a large quantity of the Enfield data, principally audio recordings. His opinion given to me in an e-mail on this is interesting: “Yes, having listened to all the tapes (over 100) and sifted through Maurice’s letters etc I changed my mind from being dismissive (“It’s kids mucking about”) to believing that there was far more to this case than simple tomfoolery.” (e-mail to Alan Murdie 14 Feb 2012).

Meanwhile, the Conjuring 2 has also been seen as a film with Catholic themes. Since Catholicism emphasises the importance of truth, it is necessary to put the record straight. Famously, after posing his question, Pontius Pilate didn’t stay around for an answer. But those who want the truth on the case should acquaint themselves with the evidence by going to Guy Playfair’s book and the original data and records. The Enfield Poltergeist was genuine. The Conjuring 2 is fiction like Harry Potter !

(1)http://io9.gizmodo.com/the-conjuring-2-raises-the-stakes-in-all-the-best-scar-1781434143; the website Hollywood v History also has a good review of issues, save for  accepting sceptical allegations uncritically