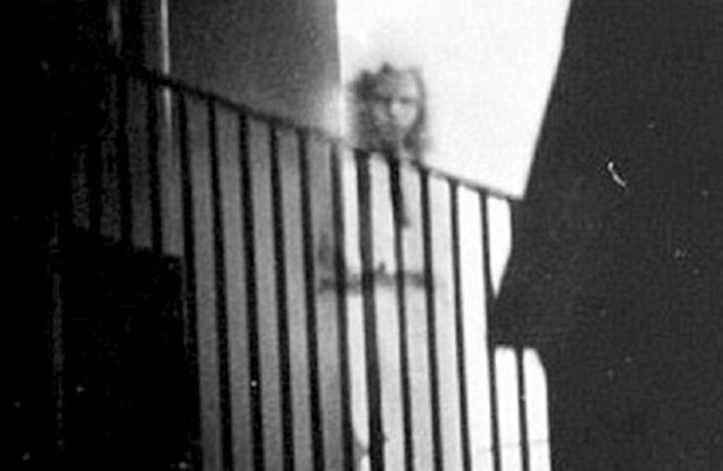 The dwindling pool of credible ghost photographs has been reduced yet further, with another ‘classic image’ succumbing to normal explanation  – a hoax.

The famous Wem Town Hall ghost girl was allegedly captured in a photograph on November 19th 1995 as a fire raged in the 90 year-old building. Amateur photographer Tony O’Rahilly took a picture in which appears to show the figure of a young girl standing in a doorway of the blazing building behind some railings. Like virtually all claimed ghost photographs nothing was seen at the time; the eerie image was only noticed on examining the print some months later.

One could scarcely hope to have a more dramatic backdrop for any apparitional image. Opinions varied between whether the striking image was a simulacrum or a genuine spirit photograph, perhaps the ghost of a 14 year-old girl named Jane Churm who allegedly started another disastrous fire by accident in Wem in 1677 when she set alight the thatch of her cottage with a candle.

This rather sinister picture has been regularly hailed as a genuine photograph of an apparition. Dr Vernon Harrison of the Royal Photographic Society and a keen psychical researcher had his doubts; the Association for Anomalous Phenomena  (ASSAP) also cited a falling beam and tricks of light and flame. Another suggestion was that the image was created by a falling beam, and the human capacity to see patterns within flames. Analysis of the negative by the National Museum of Photography, Film and Television in Bradford found a series of horizontal lines on the girl’s face not seen elsewhere on the image, suggesting that the picture had been taken from a television set and imposed on the fire picture. Other pictures and films taken of the blaze did not show any apparitions.

Now what is put forward as the complete explanation has been given by Brain Lear, 77, who maintains the image of the girl was taken a local postcard of Wem High Street dating from 1922. Mr Lear spotted the image when the card was reproduced as a nostalgia item.  “It is interesting to compare the two pictures,’ said Mr Lear, “I was intrigued to find that she bore a striking likeness to the little girl featured as the ‘Wem ghost’”.

Mr O’ Rahilly died in 2005, so short of actual spirit communication or a posthumous written confession it is not possible to know why he perpetrated such a hoax. But it is reminiscent of another classic ghostly girl photograph, also exposed as a hoax. This was an image published in 1919 by Dr T. D’Aute Hooper, a one legged faith healer and medium from Birmingham championed by Archdeacon Thomas Colley and others (See Henslow, G. The Proofs of the Truths of Spiritualism (1919) London).

Purportedly showing the spirit form of a little girl holding a bunch of flowers, Hooper’s photograph was identified over 60 years later as a copy of an image  from a sentimental Victorian painting ‘For You’ by Charles T. Garland used to advertise Pears Soap. (See: Arthur C. Clarke’s Chronicles if the Strange and Mysterious (1987) John Fairley and Simon Welfare). It seems that such images were easily passed off to the possibly less visually sophisticated public of the 1920s.

There are a considerable number of incendiary ghosts and poltergeists in British ghostlore (the phenomena has even been dubbed “pyrokinesis” by more scientifically inclined investigators), though fire was not among the tricks attributed to the well attested Wem poltergeist of     (see Poltergeists (1940) by Sacheverall Sitwell. Traditions of ghosts appearing in a fires feature in the saga of Borley Rectory (The Most Haunted House in England (1940) ; whilst in Edinburgh fear of a spectral female fire-raiser who threatened whole streets persisted for generations into the 19th century.

It seems that as soon as one ghost photograph is dispatched another is likely to pop up. Coinciding with the demise of the Wem ghost picture, the Daily Telegraph news website ran an account of a ghostly woman  photographed in Kelsey Park, Beckenham, Kent.  Mr Paul Reed, 46, claimed he was walking his dog Harry.  Mr Reed said he was shocked when he saw the ghost materialise behind a park bench, whilst his pet growled in fear and was refused to move. Nonetheless, Mr Reed maintains he managed to photograph the apparition, with two ducks in the foreground. The resulting image shows a light shape which might be interpreted as a woman in a long dress.

So far there have been no reports published of any detailed analysis and the response to this extraordinary claim has been lukewarm. If the story is true, Mr Reed would be one of a tiny handful of people to have coolly snapped a photograph of an apparition when it appeared (nearly all claimed photographs rely on later identification). A local source ‘Samuel Allan’ claimed a vague story of a woman having been “buried in the park in the 1890s”. But this is not corroboration of anything paranormal in the photograph; nor have any other witnesses been identified. Perhaps Mr Reed  misinterpreted a trick of light playing through vegetation and has whimsically interpreted the resulting photograph as a spectre; as with the Wem photograph there are of course other possible explanations.

‘Dog walker photographs Victorian Age ghost in the park’www.Telegraph.co.uk May 15 2010