That the law of England can have problems with ghosts demonstrated by the strange case of the Hammersmith Ghost which occurred in the winter of 1803/04.

The Hammersmith of 1804 was a very different place to the bustling London borough of today. Still a village in the countryside and isolated at night, it provided the perfect setting for a Christmas ghost story. Writing at the end of the 19th century, the Rev. Thistleton Dyer observed, “With some of our country peasantry, there is a deep-rooted dread of encountering anything bordering on, or resembling, the supernatural, as sometimes spirits are supposed at Christmastide to be unfriendly towards mankind.”

The Hammersmith ghost shows the strength of such beliefs and how fear of ghosts could provoke aggressive defence, with fatal consequences.

Over the festive season of 1803-04 reports circulated of a terrifying apparition lurking around Hammersmith Churchyard. Locals averred that it was the spirit of a suicide buried in the churchyard a year before.

Described as a white robed figure, it was credited with attacking the living, leaping out from ill-lit corners to seize passers by. 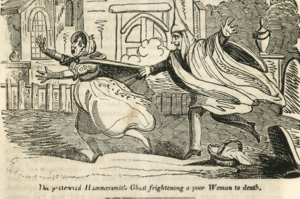 Two people were left seriously ill from the shock caused by its assaults and according to a report in The Times, the pregnant wife of a locksmith died from fear.

Hopes that  safety in numbers would ensure  protection were illusory as on one occasion the “Ghost” menaced a wagon carrying no less than sixteen passengers.

By the start of the New Year the attacks by the Ghost was the talk of the taverns.

On January 3rd 1804 the topic of the sensational attacks arose in conversation among regulars at the White Hart Inn, Hammersmith. Among the drinkers was an off duty customs officer, twenty-nine year old Francis Smith who lived locally.

Smith fancied himself as a vigilante.  Hearing the stories, he boldly declared he would take immediate action. Collecting his gun (described as a “fowling piece”) from his dwelling, Smith commenced an unauthorised patrol of Black Lion Lane into which the Ghost reputedly disappeared.

At around 11 o’clock, Smith was rewarded by a figure in white appearing in the lane. Challenging the apparition he demanded to know its identity, repeating his demand but no answer was forthcoming. When the figure moved towards him, Smith discharged his gun and shot the ghost which immediately collapsed.

On reaching the fallen “Ghost”, Smith discovered the terrible consequences of his rash act.

Lying on the ground was the body of a 23 year old brick layer named James Milwood (or Milward) whose white apron and flannel clothing he had mistaken as the sepulchral attire of the phantom. According to witnesses arriving at the scene, Milwood had been shot through the jaw and – in contrast to the bold bar-room ghost hunter of few hours earlier –  Smith was a gibbering wreck. Milwood’s body was duly carried to the nearby Black Lion Inn whilst Smith was taken into custody. 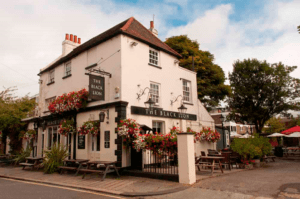 On January 5th an inquest was opened at the Black Lion Inn (it was not unusual to convene inquests in pubs and hotels in the vicinity of an unexplained death during the 19th century).

After hearing evidence, the jury returned a verdict of unlawful killing as the cause of death for Milwood. This verdict meant that  Smith was duly arraigned and sent for trial at the Old Bailey on a charge of  wilful murder.

With a speed enviable today the trial opened a mere ten days later on Friday, January 13th 1804, with Smith facing a charge of wilful murder. The Court was presided over by three judges, Lord Chief Baron Macdonald and Judges Rooke and Lawrence. No full report of the trial has survived but contemporary accounts detail some of the most incredible evidence ever received by a Court sitting at the Old Bailey.

A variety of witnesses testified to the existence of the Ghost giving what seemed to be incredible. A Thomas Groom told of how he had been seized by it before Christmas. William Girdle, a night-watchman testified of how he had seen the apparition for himself on December 29th and how on the night of January 3rd he had arrived at the scene of the shooting to find the prisoner in his agitated condition and Milwood lying dead. The sister of the deceased spoke of how she believed the Hammersmith Ghost to be “all in white with horns and glass eyes”. Milwood’s mother-in-law, a Mrs Fullbrook, spoke how Milwood had been mistaken as the ghost the previous Saturday evening.  Certainly, if the jury doubted the existence of the Ghost, there were many in Hammersmith who were convinced otherwise.

Amidst this colourful testimony Francis Smith sat silent throughout. Not until the very end of the 19th century and the passing of the Evidence Act 1898 did the accused became a competent witness in his own defence but it appears that an unsworn statement was received by the court. In this Smith explained that “on the day on which the fatal catastrophe happened and at the very moment of the affair taking place, he did not know what he was doing. He spoke to the person twice, and was most agitated on receiving no answer, that in his confusion and dread, he was unfortunate enough to commit the rash action; but he solemnly declared to God, that he had no malice against the deceased, nor any intention of taking away the life of any individual whatever.”

The jury returned a verdict of manslaughter, seemingly accepting that Smith carelessly fired upon what he honestly took to be a ghost. However, this was rejected by Macdonald L.C.B. who it appears disapproved of the vigilante aspect of the killing.

Giving  further directions, Macdonald L.C.B declared:  “The killing of a person through apprehension for one’s safety, or by mere accident, may indeed be styled only manslaughter, but unfortunately such circumstances cannot be found in this case.

“If the law were otherwise, and if a man could say he thinks another deserves death for having committed such and such an act, and therefore goes on to the highway and executes judgment with his own hands, by shooting robbers and others, whom he may deem troublesome” dreadful would be the consequences. It is fortunate that the law of this country has made such an offence to be murder”.

This was tantamount to a direction to convict Smith of murder, which the jury duly did.  As the law stood at the beginning of the 19th century there were only a strictly limited range of verdicts in a case of homicide. Human beings were automatically presumed to know the consequences of their acts and in cases of self defence the legal burden of proof was on the accused, a rule which survived as late as 1957 (R. v. Lobell [1957] 1 All ER 734).But although Smith was sentenced to death the Judges did not intend Smith to hang.

Conscious that one death was more than enough from the bizarre affair, Macdonald L.C.B. announced that the case would be reported to His Majesty forthwith. According to the report “His Lordship was so speedy in his humane office, that a respite during pleasure arrived at the Old Bailey before seven o’clock.”  Smith’s death sentence was commuted to one year’s hard labour.

The case put paid to appearances of the Hammersmith Ghost, a case of exorcism by prosecution and conviction. Later a shoe-maker named Graham confessed to dressing up as a ghost and making a nuisance of himself.

Interestingly, just over the thirty years later, just  across the River Thames from Hammersmith came the first appearance of a similar bogeyman, ‘Spring Heeled Jack’ on Putney Common in 1837.

The case reflected a problem recognised by jurists and textbook writers in the law of manslaughter and self defence. It remained a vexed issue in English law for many years, as to what extent a person who mistakenly uses force as a result of an honest but unreasonable belief should be held liable for their actions. Complex rules on retreat and homicide in private defence applied, with a mistake only being a mitigating or excusing factor if it was a reasonable one, judged in terms  from an objective point of view and not from what an accused considered reasonable.

Towards the end of the 19th century the mental state of the accused received greater attention and the issues raised by the Hammersmith Ghost case grew in importance. In Rose (1884) 15 Cox 540 it was accepted that any belief justifying the use of force had to be a reasonable one as judged by the jury. However, there was little judicial guidance as to how the reasonableness or otherwise of any belief was to be assessed, especially when it came to a belief in ghosts.

In a Canadian case R. v. Machekequonabe (1894) 28 Ontario Reports 309. the accused armed himself with a gun and chased a figure he believed to be an evil spirit called a “Wendigo”. After challenging the figure three times he opened fire, only to discover he had shot and killed his foster father. A Divisional Court upheld his conviction for manslaughter instead of murder. 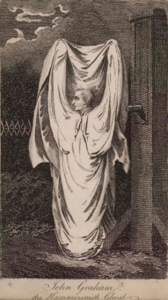 In the early 20th century academic writers brought ideas such as “reasonableness” under scrutiny, the Hammersmith Ghost provided a ready example for discussions. After many twists and turns in case law and development the law finally resolved the questions in 1984 holding that an unreasonable but honest mistake could found an acquittal in Williams [1984] 78 Cr. App. R 279. This has become the modern test. If ever a future case like the Hammersmith Ghost occurred, one of the questions that the jury would have  to decide was whether an accused made an honest mistake, not whether it was a necessarily a reasonable one in the circumstances.

On the 3rd January 2004 the Ghost Club marked the 200th  anniversary of the shooting of the Hammersmith Ghost with a special celebration. 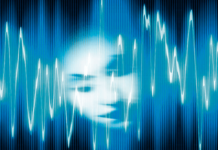