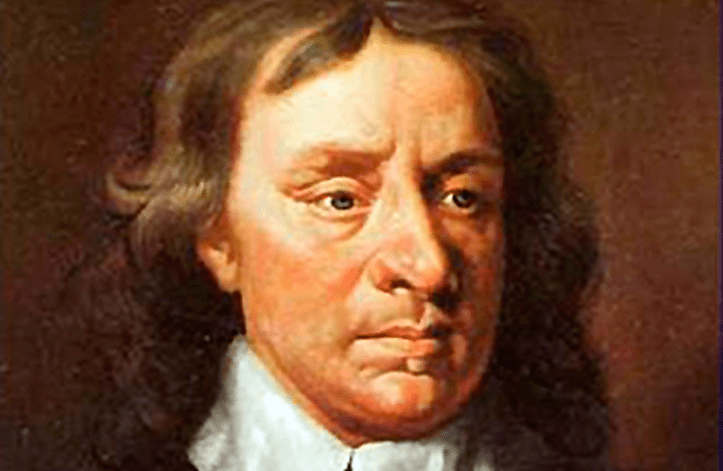 September 3rd 2008 marked the 350th anniversary of the death of Oliver Cromwell in 1658. Not surprisingly such a powerful and controversial ruler is reputed to have left a number of echoes in ghostly form. But are they really Cromwell or something else?

References to the ghost of Oliver Cromwell begin as long ago as 1681 with pamphlet works such as ‘Oliver Cromwell’s ghost dropt from the clouds’ (1681). Care must be taken with such works not to interpret them as evidence of psychic occurrences, since 17th century writers often used ghosts and visions for religious, satirical and propaganda purposes. However, it is also noteworthy that Cromwell’s one time chaplain Richard Baxter later wrote a collection of ‘true’ ghost stories, The Certainty of the World of Spirits (1691), using ghosts as evidence of a spiritual dimension to refute atheism.

Cromwell’s ghost is said to prowl the site of the Basing House in Hampshire, site of a lengthy siege between 1643-44, particularly around Grange Farm and the Old Barn.(Lore of the Land (2006) Jacqueline Simpson and Jennifer Westwood).  The King’s Head Aylesbury, Buckinghamshire also has a Cromwell Room to which Oliver’s ghost may return.

Cromwell’s modest Cambridgeshire home at Ely is reputedly haunted by a female spectre and “a brooding male” presence believed to be Cromwell himself. In April 1979, a lady guest staying with her husband encountered sensed an invisible male presence in a bedroom. She felt her arms clenched in a strong masculine grip and saw the features of the room had changed. The lady did not feel any fear but rather a strong mental bond with the unseen presence  and she sensed the words “It is not my way” being repeatedly spoken. The next morning red marks were visible on her arms, seen by both her husband and the Rev. Neil Munt with whom the couple had been staying. Cromwell’s House since has been turned into an atmospheric museum and the Ely tourist information centre, and staff sometimes report odd incidents such as their shoe laces being untied.(See Haunted Ely by Margaret Haynes and Vivienne Doughty (2003); ‘Cromwell’s Ghost Untied My Shoes!’ Ely Standard 3 December 1998). As an acknowledgement of public interest in the supernatural, the custodians of Cromwell’s House have sportingly added a flickering light effect in the Lord Protector’s bedroom to represent his ghost at the end of the tour. In November 2003, the Cambridge Paranormal Society held an investigation at the museum and a medium Marjory Kite stated she had heard Cromwell’s voice and received a supportive message from him (Ely Standard 4 December 2003).

Otherwise, mediumistic communications with Cromwell have been few and certainly widely separated; previously it was an early 20th century medium Carlos Mirabelli in Brazil who reputedly received lengthy communications in Portuguese from Oliver Cromwell, together with a few sentences in English. (Mensagens Do Alem (1929) reviewed in (1930) Journal of the Society for Psychical Research vol 26 pp142-4). In life, Cromwell is unlikely to have known any Portuguese, although he was responsible for popularising the drinking of port wine in England.(See Cromwell: Our Chief of Men (1973) Antonia Fraser).

Rosalind Heywood in The Infinite Hive (1964) mentions sensing unseen presences at Boyland Hall in Norfolk,  owned by her aunt. Her aunt encountered the apparition of a man who stopped her going up the stairs. Later she recognised the figure in a portrait of Oliver Cromwell and was told that as a young man the Lord Protector had been involved with an ‘unfortunate love affair” with a girl who lived in the house.

The ghost of a lady reputed to be the mistress of Oliver Cromwell was reported to be haunting the Golden Lion Hotel, St Ives, Huntingdonshire in January 1971. The spectre was known as the ‘Green Lady’, but the tale seems to owe more to active  local imaginations working with a surfeit of genuine Cromwellian associations in Huntingdonshire and an antique  portrait of a woman in a green dress hanging in  the hotel . When poltergeist phenomena were reported, including the movement of ornaments, bell ringing and the pulling off of bedclothes, Tony Cornell and members of the Cambridge University  Society for Psychical Research spent three nights in the premises with tape recorders and thermometers, but nothing unusual was experienced. (Cambridge Evening News  18 January 1971).

Following the Restoration in 1660, Cromwell’s body was disinterred from Westminster Abbey on January 29th 1661 for posthumous punishment. It rested overnight at the Red Lion Inn in Holborn and the taken with bodies of Henry Ireton (d.1652) and John Bradshaw (d. 1659) to Tyburn for ceremonial hanging and decapitation. Cromwell’s ghost was thereafter said to haunt both the Red Lion itself, and the cloaked figures of all three are said to wander Red Lion Square. Cromwell’s ghost is also claimed to haunt Apsely House, W1 and the alleged burial site for his body at 1 Connaught  Place at Tyburn. Others claim Cromwell’s ghost haunts the site of the Battle of Naseby in Northamptonshire where an alternative tradition claims he was secretly buried. (The Cromwellian Gazetteer (1987)  by Peter Gaunt; Cromwell: Our Chief of Men (1973) Antonia Fraser;  Ghosts of London (1982 )by A.J. Brooks). 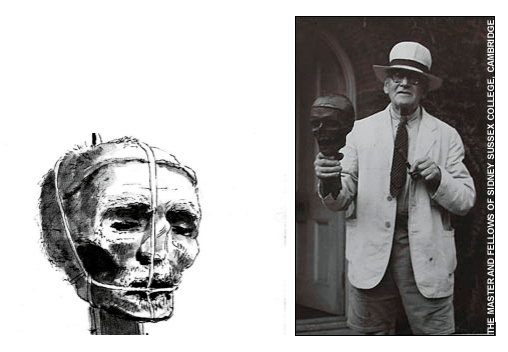 Cromwell’s severed head was displayed on a spike at Westminster until the Great Storm of 1703 when it was blown down and taken away by a sentry. It then passed through a number of keepers until finally receiving a decent burial at Sidney Sussex Chapel in March 1960. At any one time only three people are reputed to know its precise resting place at the college where Cromwell spent a year between 1616-17. (See ‘The Posthumous History of Oliver Cromwell’s Head’ by C. Parish  in Sidney Sussex College, Historical Essays in Commemoration of the Quartercentenary (1996)).

Seven years later there were suspicions that Cromwell’s ghost was coming back to Sidney Sussex College. Just after Hallowe’en 1967, in the early hours of November 1st, three students at rooms near H staircase claimed paranormal experiences. Linda Nield Siddall saw a purple eye, John Emslie saw another a disembodied head and a Peter Know Shaw claimed to have sensed a presence and smelt an appalling odour of rotting meat! Other students later reported smelling the curious odour, variously compared to oxo or spam that had gone off. The University magazine commented, ‘one amazing thing is that everybody takes it absolutely seriously’ (Varsity 18 November 1967). Cynics have suggested that Hallowe’en hysteria or experimentation with hallucinogenic substances may have contributed to these visions. The burial of Cromwell’s head might be seem as the stimulant to such an experience seven years later.

However, an interesting twist emerged in 1998 when historian Robert Halliday discovered an account of an early Victorian ghost sighting at Sidney Sussex College.  On the night of August 6th 1841 the tranquillity of the college was broken by the screams of two serving maids. The terrified pair had heard strange noises and seen a partly-formed white figure with no arms glide down a staircase. Constables called to the disturbance encountered a pungent smell. Magistrates were called to investigate but nothing was discovered and the incident was forgotten.  It is an interesting coincidence, that over 120 years apart the two accounts we have of apparitions at Sidney Sussex involve partially formed appearances and curious smells. (Cambridge Advertiser 11-18 August 1841; The Times 12 August 1841;The Cambridge Ghost Book (2000) by Robert Halliday and Alan Murdie).

In 2002 footsteps were heard by two Mexican students visiting the college in July 2002 and were staying near staircase O, and knocks have also been above the porter’s lodge. (Ghost Club Newsletter Winter 2002;  various informants July 7th 2002).

An elderly Cambridge man told me in December 2001 how his father who had worked at King’s College at the beginning of the 20th century had heard the ghostly sounds of horses in King’s College Chapel one midnight in 1900; it was believed to be an echo of the times when Cromwell used the chapel as a stable block for cavalry horses.

Neighing horses and the ghost of Cromwell in armour were experienced at a “rambling manor” in Huntingdonshire by a Mrs Anne E. Podro  of the W.A.A.F during World War II. She also heard clanging armour and she saw “Swooping towards the house were many men riding horses. One man towered above the rest and I knew I was looking at Cromwell.” Afterwards her Commanding Officer told her that the house was once a monastery “and was later ransacked by Cromwell who lived nearby and used it as some sort of headquarters.” (The Star 23 Dec 1951). The building concerned is likely to have been either Ramsey Manor or Bodley Manor.

Mrs Podro’s explanation was that “I like to think that Cromwell and other great leaders of old through sheer love of our country, are able to come back and help us in time of stress.”

Of course, all of these manifestations may have nothing to do with Oliver Cromwell. However, when psi events occur it seems the human mind needs, at some level, an explanation whether a spiritual or sceptical explanation in order to try and rationalize and normalise the experience, as a means of processing it. Assuming hauntings arise from a historical figure – on flimsy or non-existent evidence – is one way of trying to deal with such experiences, and, in a sense, to escape them.