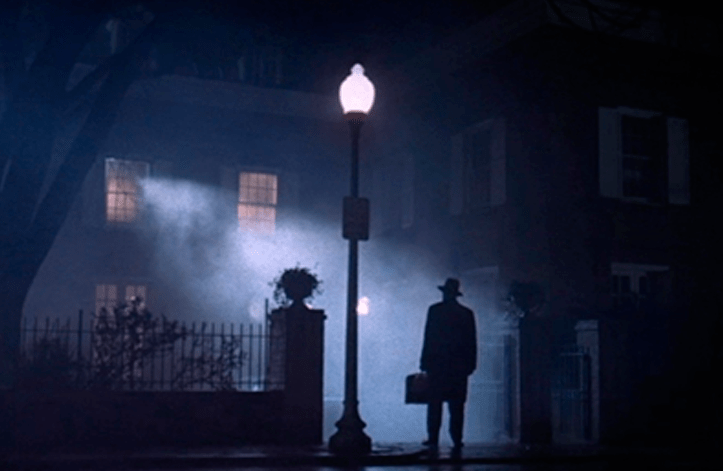 The rationalist ghost hunter Andrew Green (1927-2004) was employed for five years between 1980-1985 by several local authorities in the south of England looking into cases of hauntings reported by occupiers and tenants in social housing. He took a scientific approach – informed by the findings of parapsychology – to diagnosis situations where individuals and families believed they had a ghost on the loose in their home.  In 1982 Brighton and Hove District Council appointed Green as a consultant on haunted council properties (the first in the Borough had been reported in 1970).     Green  described himself as a “secular exorcist” seeking answers in the psychology of the residents and the findings of psi research rather than religion. Where genuine Green believed such disturbances arose from psychokinetic forces generated by the subconscious minds of living occupiers who were suffering from stress. (See Haunted Brighton (2006) Alan Murdie)

Green  found many ghostly experiences have psychological causes within the mind of the witness who might be subject to irrational fears or beliefs. He shared the opinion of Tom Perrott (1921‐2013), a long‐serving chairman of the Ghost Club who remarked, “In many cases my ghost hunting equipment consists of a note pad, a pencil and a sympathetic ear.”

Rather than suggesting spiritual forces were at work, Green emphasised the ‘normal’ within the paranormal. Fear and anxiety may cause psychological illness and worry and often provide a background to the poltergeist. What may be important is not that there is any reality in the particular ghost or haunting, but rather the strong effect that suggestion plays on the minds of the occupiers. The feeling that the group is prey to an outside force may help generate the phenomena by adding to the stress on members, both individually and collectively – a view supported from experiments with séance groups

In a small number of cases there appeared to be genuine paranormal phenomena occurring but this usually came to an end when the stress is resolved. All too often, Green, Perrott, and others  had to undo harm caused by self-appointed exorcists, occults and fundamentalist clergymen making rash and reckless claims. Responsible field researchers  (and also responsible church ministers)  recognise the impact that fear can have eroding the wellbeing and happiness of the residents.

Unfortunately, his rational approach – which recognised that stress might cause psychokinetic incidents in a household – has gone into abeyance in the years since Green’s death, with the arrival of a new generation of ghost hunters who assume too readily that spirits are involved with hauntings. This popular belief – which shows no danger in diminishing  –  is illustrated in cases over the last decade where fear stricken residents have been driven from their homes by poltergeist disturbances, or called in priests or mediums to conduct blessings, exorcisms and rituals.

For example, in September 2007 the Daily Mail reported “Family flee home after ‘being attacked by poltergeist throwing glasses’. Allison Marshall and her children Rebecca 3, Emily, 4, Shannon 7 and Aaron 8 all fled before dawn to her mother’s house after witnessing strange incidents at their three bedroom home in Carlisle. Incidents began late on the night of August 30    -31st when Allison was relaxing with her boyfriend and two friends. Objects began moving by themselves, including a hair brush and a dog’s bone flying across the room, and tumbler hurled from a display cabinet. Two further glasses were throw leaving dents in the ceiling and the plaster of the wall of the hallway. Allison and her mother returned in the daytime to find more objects moved and were also reported to have been disturbed by strange bangs, tapping sounds and the cries like a baby.

If genuine, these kind of incidents are best explained as examples of what has been termed RSPK – Random Spontaneous Psychokinesis – a termed by the American researcher William Roll. However, few recognise or consider such a possibility and it was perhaps no surprise what happened next.

The Carlisle housing association owning the property had reportedly arranged for a priest to conduct an exorcism. (SOURCE: Daily Mail 12 September 2007). Interestingly, the start of the case began almost exactly 30 years to the day of the first outbreak of phenomena in the Enfield Poltergeist case which commenced at the end of August 1977.(See  This House is Haunted (1980, 2007) by Guy Playfair).

In December 2007 manifestations in a Peterlee council house drove a family to sleep in their lounge because they were too terrified to stay upstairs. Sabrina and Martin Fallon and their daughters Amie,   16 months, and Shannon, 9, came to believe a little girl was haunting the house. Like so many cases (Enfield included), this one began with noises from the loft which caused her to call the police at 5.30 a.m. one morning, fearing intruders. The police found nothing, but one of the officers remarked “have you ever thought that you had a ghost?”.  Initially sceptical, Sabrina found her attitude changing after she saw the figure of a small girl with her head down sitting on the stairs. Even more disturbing were incidents which menaced the youngest daughter Amie. On one occasion the door of Amie’s bedroom suddenly closed without warning. Sabrina stated: “”I thought I have to get Amie out.” I tried Amie’s door and it was like it was jammed.” When she finally got into the room, she found the room icy cold, “it was like a fridge but the heating was on.”

An initial visit by medium Suzanne Hadwin failed to quell the phenomena, and a few days later  Sabrina was carrying her daughter down stairs when she heard a gasp and felt her daughter being wrenched from her arms. Red marks were left on Sabrina’s shoulder with the result she stated that “was the first time my husband believed me.”

Easington District Council recommended a vicar, but after nights in the lounge the Fallon family brought in the medium again. On December 27th 2007 Ms Hadwin conducted what was described as “an exorcism”, paid for in part by the Council. This involved the sprinkling of salt and holy water and apparently inviting angels in to clear the house. Sabrina believed she heard a conversation between the medium and a male ghost. “He was saying to me to tell Suzanne to get out of the house. He said that she was spoiling things. It was a man’s voice”. She also believed she saw a black shadow in the room with them. (SOURCES: Daily Telegraph February 8 2008; ‘There’s a ghost in my house Hartlepool Mail 10 March 2008) Fortunately, for the Fallon family the disturbances ceased after this, though perhaps not for the reasons claimed by Suzanne Hadwin.

Not always the recommended approach.
(The Exorcist 1973 Warner Bros)

It may be noted that relief has been achieved in poltergeist cases by parapsychologists using completely invented rituals, providing the affected individuals believe in their efficacy. (See: Poltergeists (1979) by Alan Gauld and Tony Cornell).

Council funding of the exorcism attracted a good deal of press coverage; it would be interesting to learn what criteria Easington Council applied to determine suitability for the job. However, it was not the first time a local authority had funded a specialist to deal with reports of poltergeists in council housing Less sympathy was demonstrated by the social landlords in a case reported in the Scottish Sun in November 2008 who refused to re-house a family troubled by a violent and spiteful poltergeist.   Tony Ritchie, 43 and Rose Cameron, 48, left their home in Mid-Craigie, Dundee, along with their adult children and baby grandson Cody after two blessings by a priest had failed to bring an end to the disturbances.  Ornaments were moved about the home, beds and carpets were slashed and knives appeared around the house. It was also claimed that Tony was knocked unconscious three times. One assault came as he was coming down stairs and on two other occasions he was “thumped” and thrown against units in the family’s kitchen. The family also claimed that the words “you must go” and “gonna hurt you” were scrawled upon a wall and notepad. Another menacing incident occurred when a Rangers doll was found with an eight inch carving knife imbedded in its side in Cody’s cradle with a Bible lying at its feet. A  Rangers poster , bedding and a carpet were all found with slash marks and what Rose described as the “final straw” occurred when baby Cody was moved  from a double bed and found lying by the bathroom door with a ceramic pig placed on his chest.

Tony was quoted as saying “This seems like a plot from a Hollywood film but it’s not”. However, it would not be surprising if suspicions were aroused as several of the incidents resemble those recorded in the South Shields Poltergeist case which received considerable publicity a few months earlier, over the summer of 2008. The report stated that whilst their children and baby Cody were now living in Edinburgh,  Rose and Tony faced homelessness as the lease on the house had nearly expired.(Source: Scottish Sun, November 14 2008).

Fleeing the scene of a ghostly experience may not always prove a successful strategy if the story of Stephen Foster, 18, of Horsham, Sussex, is taken at face value. At the end of September 2008 Stephen believed he and a friend encountered an invisible ghostly presence whilst on a camping trip to the St Leonard’s Forest.  By the time the local press picked up on the story by early October, he was sleeping on the sofa downstairs having quit his bedroom in fear, convinced that the phantom from the woods had followed him home. According to the West Sussex County Times Stephen and his friend Todd Bevis had pitched a tent at a spot near the St John the Evangelist Church at Coolhurst. The friends maintained they heard “unearthly screams in the woods and felt the right hand of the side of their tent being shaken. They then saw the entrance zip undoing itself, as though an invisible force or presence was trying to enter their tent.  Back home a week after the experience,  Stephen awoke in his room about 3 a.m. to find his bed shaking, accompanied by tapping noises and scratching sounds. He saw a black shadow cross his room and videos were disturbed from their shelves. Doors in the property opened by themselves and although sceptical, Stephen mother backed up the story stating: “I don’t know what was going on ….there’s just no explanation for it.”

The week before Hallowe’en the newspaper convinced Stephen to give a video interview on his experiences which can be viewed via the newspaper’s website.(West Sussex County Times October 7 2008; October 22nd 2008)

Similar cases to these examples can be found today. Of course, teenage campers encountering an unearthly presence in the woods is a stock story line favourite in horror films but real cases are far from unknown.  One is also reminded of the shaking tent phenomena reported among Native Canadian shamans and witnessed by European colonists during the 18th and 19th centuries (See Exploring the Supernatural (1957) by R.S. Lambert). But before embracing ideas about woodland spooks following one home,  consideration ought to be given to the possibility of psychokinesis being at work, perhaps triggered by a preceding  traumatic experience (however caused) affecting the subconscious.

Fortunately, 75% of poltergeist phenomena fade away, usually in a few weeks or months. This seems to be the natural course of most such manifestations – not the result of exorcism, save as to the extent that a ritual may satisfy the emotional and psychological needs and beliefs of those involved.