CLOSE
Friday, August 12, 2022
Home Ghosts Has the Ghost of Lawrence of Arabia returned ? 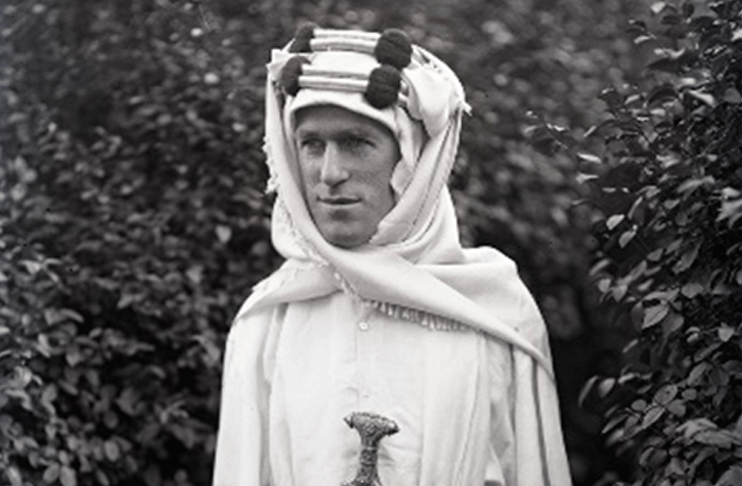 Apparition seen at Clouds Hill on 31st July 2016 near the cottage once owned by T.E. Lawrence

Europaranormal has received an interesting report of an apparition seen on Cloud’s Hill, Dorset, close to an isolated cottage that was owned by T.E. Lawrence – famous as the legendary ‘Lawrence of Arabia’. The British writer, archaeologist and soldier who mobilised the Arab Revolt in the Middle East during World War One used the cottage as a retreat from fame and barrack life from 1923 until his death in 1935.

The sighting of the apparition occurred on the morning of Sunday, 31st July 2016. The witness was one of a party of four people, including two Dorset residents, who were visiting the property, now owned by the National Trust. The cottage stands about one and half miles east of the Waddock crossroads on B3390 which turns off the A35 from Bournemouth.

The individual who reported the apparition is not originally from the UK, and before visiting Clouds Hill knew nothing about either T.E. Lawrence or the location. As photographs taken on 31st July show it was a clear, sun-lit morning. The experience happened after the witness had spent a few minutes looking around the small four-roomed cottage and then walked away from the building, climbing up the slope of Clouds Hill with the aim of admiring the wider views. Indeed, the witness admits to not being particularly interested in the house or its exhibition, and being more attracted by the Dorset countryside and natural surroundings of Clouds Hill than in historical associations with Lawrence. 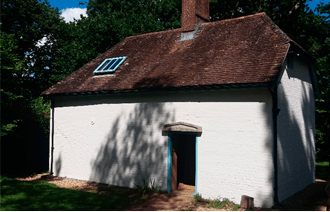 A photograph of Lawrence’s Cottage taken on 31st July 2016 shortly before the apparition was seen (contributed).

‘A human figure in black robes’

On reaching the top of the slope and looking in the direction of the Bovington Camp, the witness noticed what appeared to be a human figure in a black robe suddenly stepping out from behind a small sapling. The figure then stood still and the witness focused attention on what was presumed at that moment to be a living person. The figure appeared to be wearing a robe or bourka with a head covering  or a hood.  The witness was surprised to see someone dressed in such a way at this spot on a warm summer morning, and noticed the face of the figure was concealed by the its head dress or covering. 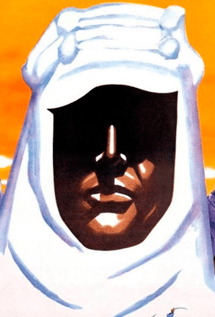 Detail from a 1962 cinema poster for the film Lawrence of Arabia – however the witness had never heard of Lawrence before visiting Clouds Hill.

‘No eyes were visible’

The witness reports that no eyes were visible and the facial features seemed distorted or missing, and that it seemed rather ‘horrible’ in some way. Nonetheless, the figure radiated the strong impression that it was staring directly at the witness.

As the witness looked on with increasing surprise, trying to make sense of the appearance, one of the friends from the same visiting party who was also climbing up the slope of the hill, called out. Momentarily distracted, the witness glanced around in the direction of the call, and on looking back to where the dark-robed figure had been standing was astonished to see it had vanished. There was nowhere that the figure could have moved out of sight in the second or two that the witness looked away.

More puzzled than alarmed or worried, the witness then walked back to join the friend. The whole party then left Clouds Hill shortly afterwards, going on to have lunch at a nearby country restaurant. After this they went on to Morteon Church and graveyard, where T.E. Lawrence lies buried.

Lawrence suffered a fatal a motorbike accident in May 1935 on the road a few hundred yards from Clouds Hill, which arose when he swerved to avoid two boy cyclists. Dying a few days later of his injuries, his death at the age of 46 only added to the myth: stories of a ‘mysterious black car’ at the scene prompted some to think there was more to his death than just a tragic accident. Stories of a haunting in the area began soon afterwards with claims that the sound of a motorcycle had been heard and that the apparition of Lawrence had been seen going into the cottage after his death. The alleged haunting at Clouds Hill is mentioned in a number of books such as Ghosts: Spooky Stories and Eerie Encounters from the National Trust (2008) by Sian Evans, but details are rather sparse and rather folkloric.

“The best known story gained publicity gained considerable publicity in the years before the Second World War, and concerned the ghost of Lawrence of Arabia. A legend in his life, the rumours after he was killed in a motorcycle cycling accident were as remarkable. At first they concerned aural phenomena. The throaty roar of the powerful Brougham Superior which Lawrence loved to ride was heard at night in the vicinity of his Dorset home, Clouds Hill….

Some local farm workers claimed that the most realistic sounds could be heard coming towards them just before dawn. The noise of the motorcycle ended abruptly, though always at some distance from the listener. This story could, of course, apply to a real motorcycle being started somewhere in the vicinity, for sounds carry uncannily in the quietness of the dawn. However, local people with some justification claimed that there was no chance of mistaking the unique sound of a Brough Superior once it had been heard. 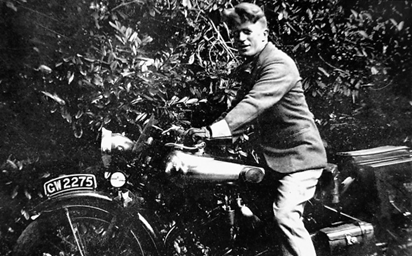 The last published account of a named witness supposedly hearing the motorcycle was in 1973, recorded by Andrew Green in Ghosts of Today (1980) although Green commented that ‘Assumed by the romantic to be the machine used by Lawrence it could will be the ghost of another cyclist who crashed and was killed there some years ago.’ Equally, the motor-cycle could have been one used by a living rider.

The tantalising reports of a phantom of Lawrence, in Arab dress, being seen entering the cottage arose in 1937 according to National Trust guides at the property.

The witness to the figure on 31 July 2016 states knowing nothing about these various ghost stories prior to the sighting, and even when informed did immediately connect the apparition with Lawrence, feeling that it resembled ‘a nun’. However, on being shown a selection of photographs of T.E. Lawrence in Bedouin-style dress, the witness states that the profile and outline was similar to the form as it appeared, although the head dress worn by the apparition lacked the knotted braid or chord which features in the many of the photographic portraits of Lawrence. 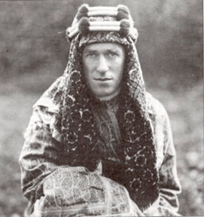 This latest sighting has also been reported to the Society for Psychical Research and to the Ghost Club and further enquiries are continuing locally.