Traditionally Christmas is the time for ghosts and hauntings and telling spine-chilling tales.

Fortunately, genuine ghost experiences are seldom as terrifying as those in folklore and fiction, but is it true that such experiences are more common over the festive season?

In fact, there are five reasons why Christmas time in the Northern Hemisphere may be particularly conducive to ghost encounters and spooky

The most likely place to see a ghost or have a paranormal experience is in your own home – after all we speak of ‘Haunted Houses’.

The majority of ghosts and hauntings are domestic, so it stands to reason that when people are at home celebrating they are more likely to encounter any  manifestations in their home. Also, with people coming together there are potentially more witnesses gathered together to experience anything that might occur.

On the downside, friction may also arise in households during periods of close confinement over the Christmas period. Many researchers into poltergeists believe that family tensions play a part in generating poltergeist activity. Thus, if people are undergoing stress, it is theorised that the unconscious mind of one or more of the household may generate psychokinetic energy which results in object movements and strange sounds. 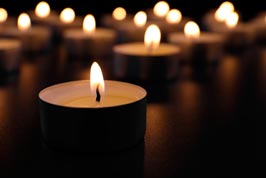 This suggests a possible link with dreaming and dream‐like states, and brain chemistry at night being more receptive. If so, Christmas being at the darkest time of the year would provide the ideal environmental setting for putting the brain into this state.

Additionally, many people report seeing a ghost whilst they are in bed, either in conditions of being half-asleep or half-awake, again suggesting a link with brain chemistry. 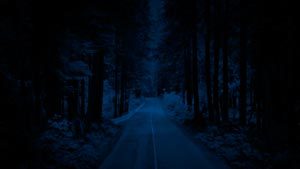 Investigators find this seems to replicate in the wider world. Many apparitions are seen by people are in a state of relaxation (or whilst in bed, as above). Ghost hunter Andrew Green (1927-2004) used to ask ghost witnesses what they were thinking about the time when they saw a ghost. The answer was generally ‘Nothing in particular’ and certainly not ghosts (. To the extent that Christmas time is an opportunity to time off thinking about work and other concerns allow the brain to be more receptive to psychic experiences.

People out driving in the countryside at night may also be prone to ghost sightings when driving on dark, empty roads. With a narrowed range of vision and little in the way of visual stimuli, the brain may go into a relaxed mode, again making it receptive to seeing apparitions. Perhaps this phenomenon lies at the root of stories of spectral riders, phantom coaches and ghostly pedestrians and hitch-hikers traditionally said to manifest over the Christmas period. 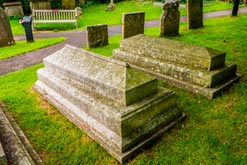 Recollecting friends and family members whom we have loved but are no longer with us is common at this time of year. Christmas is also a spiritual festival in Christianity and one period of the year where more people attend church than usual, engage in spiritual practice and pray or visit burial grounds and recall the deceased.

Though not consciously thinking of seeing them as a ghost, such memories may combine to help the subconscious mind generate apparitions within our minds and imaginations. This may explain the experience of poet and novelist Thomas Hardy (1840-1928). On Christmas Eve 1919, Hardy was coming out of Stinsford Church in Dorset and saw a figure in 18th century clothes near the grave of his grandfather.   Hardy’s second wife, Florence gave details in a letter to a friend  Sydney Cockerell   written on 27 December 1919 that Hardy had indeed seen what he assumed to be a ghost:

“He saw a ghost in Stinsford Churchyard on Christmas Eve, & his sister Kate says it must have been their grandfather upon whose grave T.H had just placed a sprig of holly – the first time he had ever done so. The ghost said: ‘A green Christmas’ – T.H. replied ‘I like a green Christmas’. Then the ghost went into the church, &, being full of curiosity, T. followed, to see who this strange man in 18th century dress might be – and found – no-one. That is quite true – a real Christmas ghost story.”

However, just how such a postulated mechanism may operate remains a mystery. 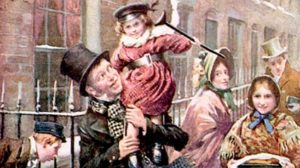 Many psychical experiences are linked with states of high emotion such as key moments in the cycle of life, birth, death or moments of crisis.

Consequently, with Christmas being a highly emotional time when experiences can be more intense and meaningful, more people may be mentally primed for encountering paranormal experiences. A happy light-hearted mood can be conducive to triggering phenomena. An example is the 19th century spiritualist seances were often jolly affairs with singing and exuberant displays of behaviour. A celebratory atmosphere can trigger odd manifestations, often of the poltergeist variety.

An example was a manifestation reported at Penkaet House, near Edinburgh at Christmas 1923 whilst a family were singing carols by the fire. They reported the family crest above the fireplace leaning forward of its own accord towards them, as though bowing towards them before moving back up in defiance of gravity before and resuming its normal position!

Haunted pubs also generate many such accounts such as the phantom footsteps regularly heard on Christmas Eve at the Cross Keys Inn, Saffron Walden in Essex in 1963 and 1964, or the footsteps and bangs heard at the Queen’s Head, Blyford in Suffolk December 1969 by the landlord and drinkers in the bar who thought the pub was being burgled.

Psychologist Carl Jung (1875-1961) encountered many synchronistic events such as premonitions, meaningful coincidences and throughout his work as a therapist. He noticed that they almost always accompanied periods of emotional intensity and transformation. His student Anita Jaffre pursued this line in her book Apparitions (1979) noting how many people encountered ghosts at Christmas and New Year, times of numinous and emotional significance.

Of course, the older and traditional view is the spirit world is more active itself at this season of the year, the time when the spirits of the deceased returning to re-visit the scenes of their earthly life. That is certainly an ancient view and one which is still widely current in many cultural traditions. So, who know what one may encounter this Christmas Time?