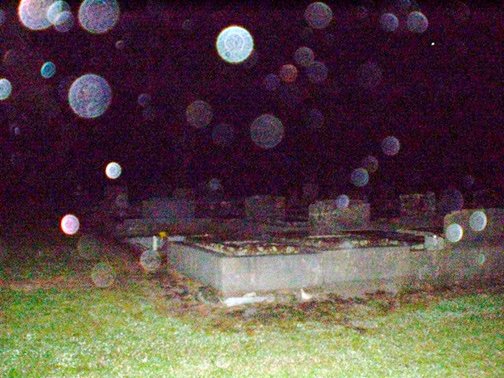 ORBS ARE NO MYSTERY

Since the late 1990s, small blotches of light appearing on photographs taken with digital cameras have been treated by many people as a ghostly mystery. Dubbed ‘orbs’ they have been often been claimed as physical proof of the paranormal and evidence of a spirit world.

In fact, they are nothing of the sort – although many people may find this hard to accept.

Over the last decade orbs have been conclusively explained by a number of researchers working independently. They have an entirely normal explanation.

In 2005 a short film by British photographer Philip Carr entitled Riddle of the Orbs demonstrated that anyone who wanted orbs photographs could obtain them by taking pictures in a dusty environment. Or just thump a pillow, take photographs and you may get some orbs. It is hardly surprising orbs appear in pictures taken in dusty old buildings and ruins which ghost hunters like to frequent. Philip Carr’s explanation is simple. The reflection of tiny particles in the air may appear in pictures because the typical flash unit of a camera today is much closer to the lens than in the past. Thus, those particles of dust you see in a beam of sunlight, bobbing around with air currents and Brownian motion, show up as orbs with digital photography.

In 2010 research published by Steve Parsons of the group Para.Science and presented to the Society for Psychical Research showed orbs were no more than artefacts generated by modern cameras (also published in the November 2010 edition of Anomaly produced by the Association for the Study of Anomalous Phenomena).

Steve Parsons undertook numerous experiments using a Fuijifilm W1 3D  digital camera, by which matched stereo images are taken of the same view. A total of 1,870 stereo pairs of images were taken at over 20 locations in the UK and Eire, including a number of allegedly haunted sites. Some 630 orb-like images were obtained.  If orbs are not reflections of particles less than 2-3 cm from the lens, then the orb should appear in both images. In 491 pairs obtained, the orb was only present on one image, and in 139 pictures orbs were present on both images, but not in the same position (i.e. it was another orb image but not the same object).  Steve Parsons concludes that “…all 630 that we obtained in the survey were readily explained using the stereo photography technique. That is 0% paranormal but 100% explainable.” At the end of the article he expresses the hope, “…that this extensive series of pictures will finally remove much of the confusion and nonsense that has surrounded the orb.”

One piece of negative evidence supporting the theory that orbs are artefacts caused by modern technology is their almost total absence in photographs taken before digital cameras. Occasionally, you can see what might be taken as an orb picture in an old photograph – for example the 1973 photograph of the Rollright Stones in Oxfordshire/Warwickshire in Anthony Hippesley-Coxe’s Haunted Britain. But this photograph was an attempt to catch sunrise at the stone circle, with the ‘orbs’ produced by sunbeams hitting the camera lens. More significantly, prior to digital photography, no-one suggested spirits of the dead routinely took the form of orbs.

Over the years, I have noticed that regardless of any explanation put forward, believers in orbs insist that their orb photograph is a genuine one. Regrettably, the criteria for distinguishing a natural orb from an allegedly paranormal one is nowhere clearly defined, suggesting identification rests purely on personal belief, not on any independent evidence or criteria. Furthermore, whilst claiming their particular orb as paranormal, believers also exhibit a curious reluctance for probing the phenomenon any further.

Such attitudes are comparable to those displayed during the hey-day of spirit photography in the 19th century and which ultimately contributed to its demise. Even some spiritualists gave up on spirit photography. By 1875 the medium Stainton Moses had personally examined some 600 alleged ghost photographs, showing just how widespread such images were. But his conclusions were damning: “Some people would recognise anything. A broom and a sheet are quite enough for some wild enthusiasts who go with the figure in their eye and see what they wish to see…I have had pictures that might be anything in this or any other world sent to me and gravely claimed as recognised portraits’ [Human Nature, May 1875,p202]. In no more than about a dozen of his hundreds of examples did Moses think that psychic activity had been captured on film. Despite his views, he himself was fooled by the French spirit photographer Jean Buguet, who confessed to faking pictures at a sensational trial the same year. Nonetheless, despite Buguet admitting his guilt, many of his victims pathetically continued to assert that their photograph of a deceased loved one was genuine; they were never interested in discovering more.

This kind of wishful thinking needs to be guarded against today. There are more than enough genuinely inexplicable things being seen, sensed and recorded

Today, advocates of orbs do not seem interested in thinking along these lines or about how research could develop. Indeed, no-one seems to want to take on the mantle or title of ‘discoverer of the orbs’ (if orbs are a genuine psi effects then surely there is a Nobel prize waiting!). Many advocates of orbs seemingly want them to remain a mystery, content to go on snapping them without gaining any further insight. Instead of being used as equipment for investigation, digital cameras are being deployed as ritual objects deployed to gather what believers interpret as traces of a spirit world. Effectively spiritualism has moved from the séance room to re-emerge in attempts at ghost photography. Meanwhile, non-believers and people who have no interest in the topic simply dismiss orbs as glitches spoiling their pictures.

If anything, the remaining advocates of orbs bring to mind the observation of the psychical researcher G.N.M. Tyrrell his book Homo Faber (1951) who considered that both believers and sceptics often seem accepting of explanations for experiences on the flimsiest of evidence or reasoning. Tyrrell summarised these responses to the paranormal as follows: ‘When one comes to think of it, to deny, to flee from and to normalize are three ways of escaping from the paranormal’.

Far from being evidence of the paranormal, orb photos are a diversion and escape from it. And perhaps on some level many proponents of orbs actually realise this fact.